Trying to plan a route across the U.S. that takes us to small town brew pubs is no easy task. But here it is, the best laid plans… 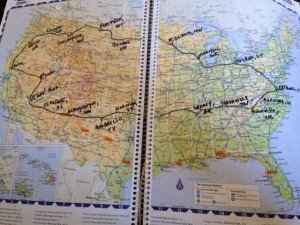 Bend, OR (home of Deschutes and 10 Barrell Brewery)

Lewiston, ID (stopping at Paradise Creek Brewery in Pullman, WA along the way.)

Stevensville, MT (sauntering over from the Stevensville Hotel to Black Smith Brewing Company.)

Fort Peck, MT (Not seeing a brewery. We just want to stay here. We’ll pull some Sierra Nevada Barrel Aged Torpedo out of the stash in the trunk of our car.)

Roanoke, VA (stopping at Bulls & Bones on the way.)

Searcy, AR (back to the Sierra Nevada stash we’ve stowed in the trunk.)

Amarillo, TX (we think the RV Museum is a must stop.)

Ely, NV (so we can stay at our favorite kitsch hotel: Hotel Nevada. And drive the loneliest highway as we head for home…)

← We’re going on an adventure! SNtoSN
Pales in Comparison 2018: the planning begins… →

What’s that? You want to buy us a beer? And support students! Aww shucks.

When your breakfast matches your morning read. #annotationftw Inspired by this book from @anterobot @remikalir ... decided to weave various forms of annotation throughout our English Ed capstone course pic.twitter.com/m3xr…

Made it through fall 2022. All my gratitude to students and incredible colleagues. 💛 pic.twitter.com/PXmp…

FFS. Faculty DID report to Chair and Dean. The Dean allowed DS to come to Friday meeting, to stay, and "hopes" the woman Affected isn't "too sad." Please @ChicoState stop telling the faculty and students to start with those administrators. They failed them. We failed them.

Completely shaking in anger. @ChicoState has created a situation in which men, but mostly women--faculty, students, staff--are opening a vein to share their fear. twitter.com/BotanyRu… 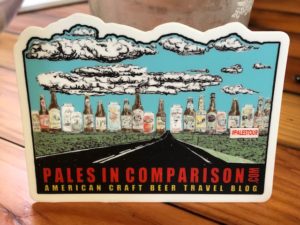